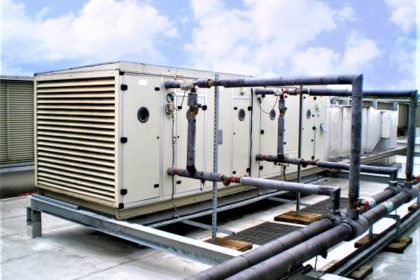 In this article we look at how a typical and simple air handling unit works, including each of its component parts.

Air handling units (AHUs) can be found in the roof void, basement or floors of a building and will serve a specified area of that building. One building will therefore often have multiple AHUs.

The purpose of an AHU is to clean, condition and distribute air around a building to help maintain good indoor air quality. This is important for any area or room that relies on having a continuous contaminant-free air supply. AHUs take air from outside the building and will filter the contaminants from it, heat it or cool it as required, and then send it through the ductwork to distribute it to designated areas within the building. Most AHUs have an additional duct, which takes the used air (return air) out of the rooms and back to the AHU and to a fan that discharges it into the atmosphere. Some of the return air might be recirculated, which helps save energy.

A grill at the air inlet of the AHU prevents debris being pulled into the AHU. Dampers at the inlet regulate the amount of air entering or exiting the AHU. In a closed position they will prevent air entering the system and fully open they will allow air in and out.

Beyond the dampers are three sets of filters: pre-filters or panel filters that catch large dust particles, pollen and fungal spores, secondary filters or bag filters that catch smaller dust particles and microorganisms such as yeast, and finally a finer grade of filtration, such as HEPA filters, which are capable of catching microorganisms such as bacteria and viruses. The grade of filters required depends on the application the AHU is serving (food production areas, clean rooms, such as in pharmaceutical and research facilities, hospitals etc.) Removing contaminants from the indoor atmosphere helps protect both processes and people. Pressure sensors measure how dirty the filters are. As filters collect dirt, the airflow through the filter media becomes restricted and this will cause a pressure drop as shown on the pressure sensors.

For those buildings that need to control humidity, there will be a humidifier after the heating/cooling coils. A humidity sensor at the outlet of the AHU measures the amount of moisture (set point humidity) in the air. Where the air does not contain enough moisture, the humidifier will release steam or spray water mist into the airflow. Where the air contains too much moisture, the cooling coil will cause the moisture to condense and flow away and/or will reduce the air temperature. Where the air temperature dips below the supply set point, the heating coil can be switched on to raise the temperature again.

After the humidifier comes a fan. The fan pulls the air in from outside and through the dampers, air filters and heating/cooling coils and into the ductwork. A pressure sensor across the fan will detect whether the fan is operating or whether there has been an equipment failure.

The fan is followed by the ductwork, which takes the air round the area the AHU serves. Some of the ducting brings the used air back from the specified area and into the return AHU.

A fan pulls the air from around the building in and then pushes it to outside the building. The return AHU also contains a damper, which stands at the exit of the AHU. This will close when the AHU is switched off.

An AHU forms just part of the wider HVAC system. According to Mecart, a Canadian cleanroom manufacturer,

“There tends to be confusion between HVAC systems and AHUs. The air handler is the enclosure in which the air is heated, filtered and cooled. The HVAC system is the whole set up, which includes the AHU as well as the duct work, diffuser, HEPA filters, air return, and control and monitoring systems.”

HVDS provides and installs AHUs to the food industry. To discuss an AHU for your food production area, contact us on 01785 256 976 or get in touch here.

What you can read next

Connect with the author